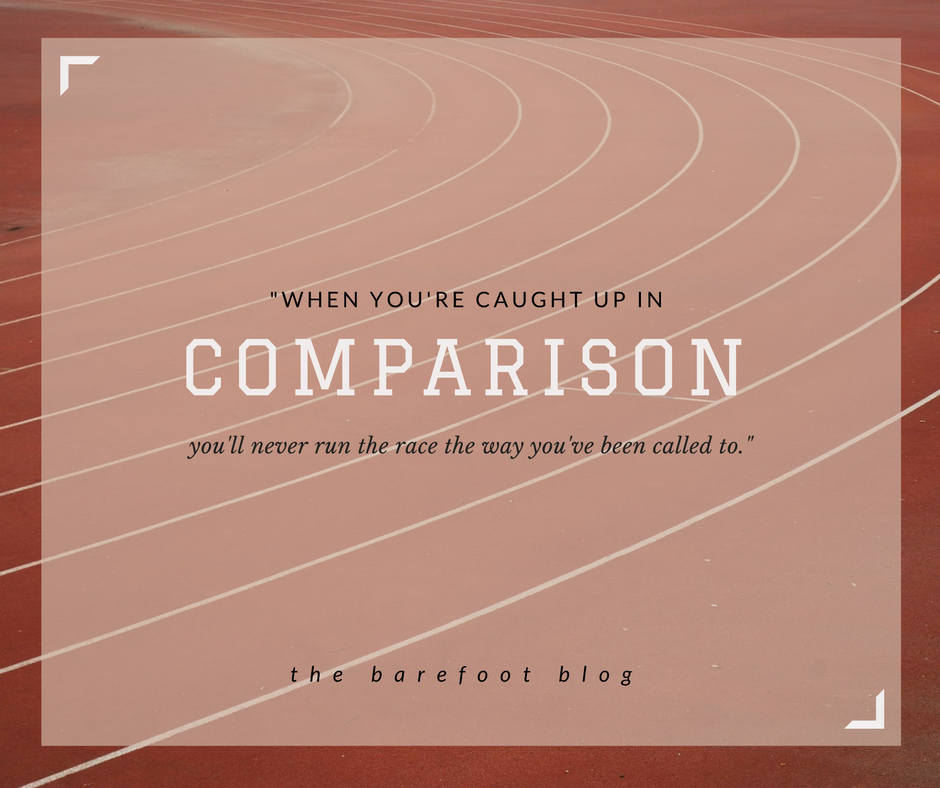 I have had neck problems for around 5 years now– aching muscles, crunchy knots in my shoulders, and dozens of appointments to the chiropractor and physical therapist. It seems like no matter what I do, there is always a kink in my neck. I am forever beggin’ for someone to rub my shoulders!

I was sitting in church the other day during prayer time and while I was *supposed* to be praying (sorry bout it), I was rubbing out a knot in my neck thinking, “Gosh. What did I do to my neck?!  Why do I always hurt so bad!”

As I’m furiously trying to rub out this kink and pray simultaneously, God spoke something to me not just regarding my neck, but about the state of my heart:
“If you’d quit turning your head so much–You wouldn’t hurt.”

That couldn’t be more on point.

Back and forth; back and forth– I’ve constantly got my eye on somebody else’s race.
I turn to the left- She’s prettier. And that one’s smarter. This one is more successful. She has more friends.
I turn back to my lane and see that I lack.
I pick up my speed.
I turn to the right- She is pursuing her dream. He’s more talented. She has TIME. Their marriage looks perfect.
Sprinting. I’m sprinting.
Left, right, left, right. Running harder, breathing faster.
I have no idea how many laps I’ve run, what hurdles I’ve jumped over or who’s even cheering for me in the stands.
Because frankly, I’m too busy checking my life against everybody else’s.

I’ve run so hard and I feel like I’ve gone so far.
But it’s all in vain.
My neck’s in knots, my shoulders a mess because my head is turning all the time.
My heart’s got a case of comparison kinks because I’ve been trying to run somebody else’s race.

When you’re caught up in comparison, you’ll never run the race the way you’ve been called to.

Because you’re slowed down by cramps from trying to run at a ridiculous pace.
You’re burnt out from trying to jump higher than the person next to you.
You trip because you didn’t realize there was a hurdle ahead.
You’ve made yourself so dizzy from trying to focus on every other runner that you can’t even see your lane anymore. A life driven by comparison will always leave you hurting, remorseful, exhausted and empty.

This reality is very evident in the life of  a King who reigned thousands of years ago. He had the potential to be great, but his wandering eye of comparison caused him to lose sight of His responsibility as a King. King Saul was anointed by God to be the ruler over Israel; He was commissioned to lead, fight and to do whatever task God asked of Him. During his kingship, a young warrior named David (ya know- the guy who throws rocks) came along and stole the hearts of many with his mad skills. After a major victory over the Philistines, people gathered in the streets chanting :

“Saul has struck down his thousands,
and David his ten thousands.” (1 Samuel 18:7)

You can imagine Saul’s head sloowly turning to look over at David.

For the rest of His kingship, that’s where his eyes were- on David.  He pursued David’s destruction instead of pursuing God’s call for him.  Instead of running the race set before him as King, Saul’s focus became about getting rid of David, completely missing the opportunity to lead a nation well.

Let’s be real here, you feel better about yourself when you look over and see that you’re ahead: “I’m actually doing something right! And better.” It’s ugly- I know.

Thankfully, Paul offers some very relieving and healing advice when pride seems to guide our definitions of success and satisfaction:
“Pay careful attention to your own work, for then you will get the satisfaction of a job well done, and you won’t need to compare yourself to anyone else.” -Galatians 6:4

In other words, pay careful attention to your own race. Run it well. Then, when you reach the finish line, you will know that you ran what was put in front of you with all of the skill and ability that God gave you. Then, your own performance becomes enough. The need to look around suddenly fades away when we realize who we are running the race for.

“And let us run with endurance the race God has set before us.  We do this by keeping our eyes on Jesus, the champion who initiates and perfects our faith.” -Hebrews 12:1-2

As we run, may we not get tangled up in the fear that we aren’t enough, but rather stand in confidence that the One who called us will surely equip and sustain us for this long race ahead.