Wifery Tales #2: A Wedding, A Thief and Four Staples 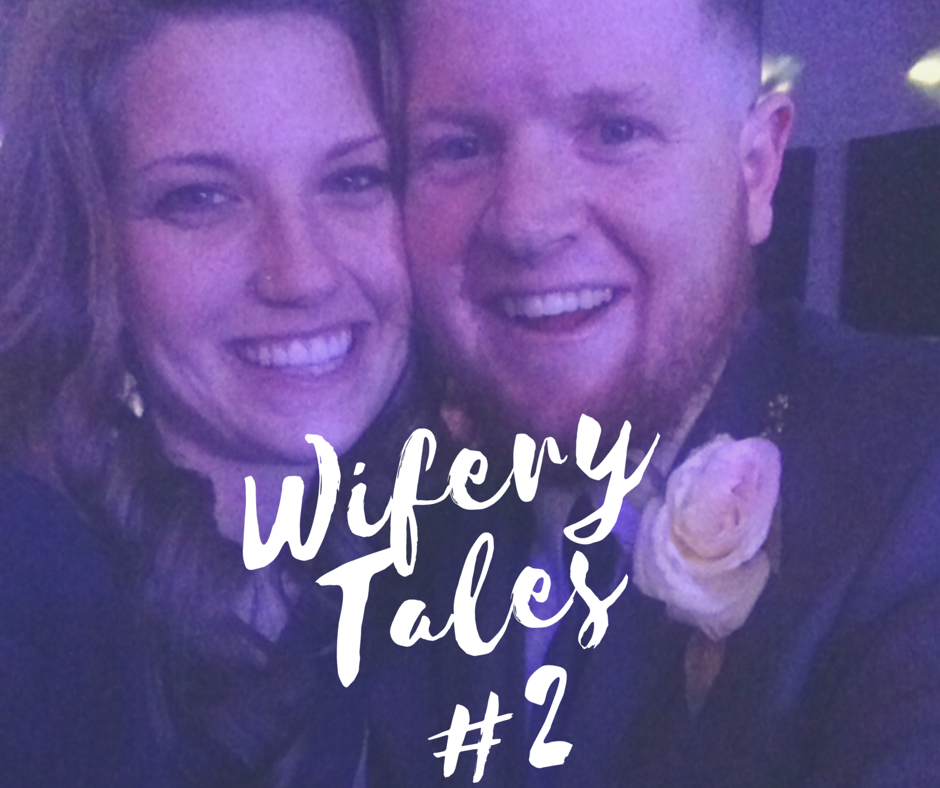 This weekend was certainly one for the books.

We got to have a little weekend getaway in Albuquerque because Lance’s cousin, Dustin and his new wife Melanie got married! It was such a sweet wedding– Aren’t they cute?!

We had a blast seeing family and friends–oh and so much dancing– so much fun!

But after the wedding is when the real adventure began.

We got to stay in a hotel and enjoy all the luxuries of that: free breakfast, soft comforters, no need for cleaning your room… Except for, well- we were in a rough part of town.

The first night we got there, someone tried breaking into Lance’s truck and in the morning, all of the rubber seal on the windows had been pressed down as if someone tried to get in with a crowbar and a hanger.

Being the obsessively secure man that Lance is, as soon as we got back to the hotel from the wedding, he decided to go check on his truck before we called it a night.

AN HOUR LATER… Lance came back saying that he saw a suspicious vehicle drive out of a hotel across the street and then drove into our hotel parking lot– only to park by Lance’s cousins vehicle. So, Lance  camped out in his truck to see what they were doing (and got their license plate!). One of the men in the vehicle got out and started looking in all the cars in the parking lot when he was interrupted by the security guard, Ernie, who approached the scene. At the sight of his car, the two hooligans fled the scene. Lance talked with Ernie for awhile and gave him the license plate number and his testimony.

It turned out that Ernie had run these guys off before but could never get their license plate! Now that he had it, Ernie decided to call the police and file a report. The police said that license plate had been stolen off of another car that day, and were very busy that night so they would be by later and would need Lance’s testimony.

Meanwhile, I am back in the hotel room all snuggled up in my comfy pajamas watching Full House (does it get any better than that?!) wondering what the heck is taking Lance so long! He  finally comes back to the room and tells me the whole story about the crazy men and that how he has to stay awake because he will be getting a phone call from Ernie to come down and give his testimony.

Well, I for one, am exhausted at this point because it is now approaching 1:00 a.m.

My eyes slowly begin to close as I gracefully fall asleep on Lance’s chest….

Eyes slowly open.. and then close.

Eyes slowly open to see googly eyes from my husband.

(I’m going to let YOU connect the dots about what this fellow was alluding to..)

And being the awesome wife that I am, although tired and weary, I consent…

But ONLY–If he brushes his teeth.

Instead of getting up to brush his teeth, he begins ruthlessly tickling me.

To all the male readers: Remember in middle school when you had the bright idea to ‘tickle’ that girl you liked *hoping* that she would think it was cute and flirtatious? And then for the rest of your life you kept doing it? And after you got married, you STILL think its a good idea?

Well its not cute. Its not funny. Its not romantic. And it SUCKS.

2. Because you aren’t in control of your random spazzes/kicks/punches/slapping that result from the repetitive poking

3. Because it makes you lose control of your bladder

4. Because it makes you laugh, when really, ITS NOT FUNNY, it hurts. But for some reason laughter is the only thing that comes out. Which signals to the guy, “Keep tickling me! I like it!”

Back to the story.

At this point, we are on the edge of the side of the bed with Lance hidden under the covers, tickling his poor wife who is trying to escape him.

When all of the sudden…..

Remember what I said about spastic kicking? Well.. I may have accidentally kicked my husband like a mule and sent him flying off the bed.

I am still on the bed, hanging off the side, laughing while blurting out “Are you okay” haha “are you okay?!”

Lance reaches his hand behind his head and as he pulls it back– It’s COVERED in blood.

I grab his head forward to look at it. HUGE gash. My hand is now covered in blood.

(Betcha never saw THAT in a steamy romance movie…)

When white coat syndrome Lance says he needs to go to the E.R.– You better believe something is wrong.

I run down the hallway to get his parents while he runs downstairs with nothing on but shorts with a towel compressed on his head and blood dripping down his back. (You can imagine what the front desk worker is thinking…)

We all hop in the car and rush to the ER. As we’re driving–IT clicks.

The police are still supposed to call back. And Lance said he would be there.

Can you imagine this with me?

Officer to Ernie: “Hey. This dude isn’t answering his phone and he said he would.. He gave me his room number, lets go do a knock and talk so we can get his testimony and complete the report.”

There is a bloody handprint on the outside of the hotel room door.

A comforter on the floor soaked in blood.

Little drippings of Lance’s blood all over the bathroom and the doorknob.

Did I mention Lance left his gun on the nightstand? right by alllll this blood? (Yes, we are 2nd amendment believers.)

THIS DOES NOT LOOK GOOD.

Arlene and I drop the half-clothed Lance and his dad off at the ER and go back to the hotel room where we clean up all the blood and conveniently run into the police officer that was about to contact Lance about the report. We caught him just in time to let him know Lance busted his head open and wouldn’t be able to speak with him.

Back to the ER we go to find out that Lance had a 1 inch gash in his head and had to get four staples to the head (poor baby!)

But don’t worry. Lance was snap chatting away, laughing and having a good time as he explained how excited he was about now having a FIFTH hospital gown to add to his collection ( the man is a nut case, I tell ya.)

3 A.M. rolls around– and we are finally headed back to the hotel to get back to sleep.

That. That was the weirdest, most eventful night of my life.

What was supposed to be romantic, turned hysterically tragic in only a matter of seconds.

And that ladies and gentleman, is how foreplay lead to four staples.